Is The IHOP Papers by Ali Liebegott worth buying? 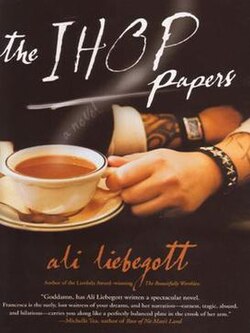 Fire Crotch
A couple of years ago my mother discovered the stress relieving benefits of swearing like a drunken sailor. I can attest to this fact as lately she and I have been going head to head in rows that always end in my mother screaming “why don’t you just tell the whole fucking neighbourhood?”.

It’s not that my mother and I hate each other or don’t get along. We’re just so similar that we drive each other, as well as my long suffering father, completely mad. Nothing she nor I do will ever be good enough; if she says it’s black, I say it’s white. Normally my aforementioned father acts a regulator, but recently he decided to undergo a double knee replacement and his absence, and the stress associated to a loved one’s hospitalisation, has destroyed the normal equilibrium that exists between my maternal caregiver and myself. It certainly doesn’t helps that she is a self declared hot headed Arian with an obsessive cleaning freak and that I’m a free spirited Gemini with diagnosed Obsessive Compulsive Disorder but alas! No natural compulsions for keeping things tidy.

This particular incident takes place in the post war zone, where my mother and I have finished firing our weapons and now are reduced to glowering silently. I swear to God, Mum and I can have cold wars that would put the former Union of Soviet Socialist Republics (USSR) and United States of America (USA) to shame.

“You know what they call Julia Gillard now?” I ask mum, not because I care too much about the acting Prime Minister but because I just can’t stand this aching silence, this cold unfeeling hatred between us, two women who dearly love one another.

“What” mum asks dubiously, too stressed out to think about politics or witty double entrendes”.
“Fire crotch”.
There is a brief second pause before she descends into a fit of laughter.
“I suppose it refers to her dominating iron will and her prowess in the bedroom” as she throws her subtle as a sledge hammer stage wink. She really should have considered a career in pantomime, especially pantomime for the completely air-headed.

I start to try and explain to mum that the term ‘Fire crotch’ has nothing to do with our pseudo Prime Minster’s sexual or political skills and only refers to the probable colour of her pubic hair, “Hey Fanta Pants! Does the carpet match the drapes?”. However I stop midway through my authoritative sentence. What does it matter anyway? If she wants to think that the term Fire Crotch or Ginger Ninja has any deeper meaning or connotations that an immature jibe about someone’s pubic hair, then good on her. At least we’re talking again.

So thank you Julia Gillard. It may be debatable as to whether you and Team Kevin 707 have been successful in uniting the Australian public or resolving workplace relations, but at least making fun at the expense of your pubis mons has united my mother and me. At least, for the moment.

Now where are my cigarettes bitch?

"God hates Australia. This filthy little island in the Pacific is a hotbed of sodomy, child sex tours and every other abominable thing"

And yet, still a better advertisement for Australia than Lara Bingle.

It was near midnight, the middle of another devastating summer. However, by early evening, a cool breeze which swept across Enmore Road and King street and the Newtown streets were made pleasant by this late hour. Young gothic girls, drunk on rum and cokes and high on poorly cut ecstasy tablets trawled the streets, willing to offer themselves to any man or woman who was willing. For most men, a city filled with inebriated women and $20.00 drugs was a heaven, but such mere mortal pleasures were not for Manek Deboto this evening.

The brilliant rock star and writer sat crossed leg in Newtown park, working his latest creation and attempting to work out whether the unsightly growth on his right testicle was contagious. Alas, he did not see the shadow behind him creep up, only when the blade slit his throat did he notice the mysterious stranger. Even if he had seen his murderer earlier, it would have been to no avail; Manek sat there grinning like an idea and blinking. He was completely scattered. He put up no struggle as his throat was slit, and as his assassin would later say, Manek in fact enjoyed having his throat slit. He died with a full erection.

Robert Langdon, it could be safe to say, was completely annoyed when his mobile phone rang. He was, as usual, in the middle of seducing a foreign woman half his age. It was often speculated, back home in New York that no American woman would ever lower herself to sleep with the professor. It is less clear however, whether that this is due to an attribute of the professor himself or whether American woman are simply frigid women.

On other end of the phone was Detective Cave. Cave was a hardened veteran who had overseen the introductions and enforcement of the rules about smoking in bars. He had lived through some hard times in his life; times when beer could not be bought on a Sunday and when the local pubs closed at 9:00pm. He had lived through the death of Daphne on ‘Neighbours’, the shooting of JR. Needless to say, he was not a man who would willing accept the forced cooperation of the NSW police force with a man who, rumour had it, ‘could not get it up’.

“Oi”, said Cave. “It’s Detective Cave here, with the Newtown police. Is this Langdon, the guy obsessed with symbols?”
“Actually, it’s professor of Religious Symbology”, Langdon replied, understandably terse about the offhand way the Detective referred to the career he had chosen, after he had failed law school, medical school, veterinary science and ‘introduction to resume writing’.
“Look, we’ve got a problem here and the boss thinks that considering the circumstances of the murder, you would be the best person to aid the investigation. Because, I mean it’s not like the police detectives have had training or experience or done this kind of thing before”.

Langdon, thinking he detected sarcasm in the man’s voice, was unable to make up his mind. On one hand, he would definitely earn even more international fame, and with fame came money and moist vaginas. On the other hand though, the 14 year old Catholic school girl was looking up at him with her imploring eyes and barely torn hymen. It was not an easy decision to be made, especially when the bitch hadn’t even made him breakfast yet.

DOES ANYONE HAVE OLD POLAROID PHOTOS THAT THEY DON'T WANT ANYMORE?
I WOULD APPRECIATE THEM VERY MUCH
N0 YOU WILL NOT GET THEM BACK
YES THE CONTECT WILL BE DESTROYED